The Town Office is now open, however, we are still encouraging people to go online for as much as possible to do their transactions.

Please call ahead to see what you need to bring, so that you have everything when you get here. If you see a long line you may want to come back at a later time.

Welcome To The Town Of Sidney, Maine 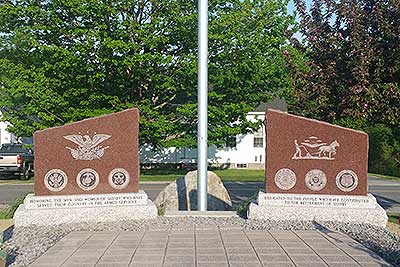 Sidney, a fast-growing, picturesque central Maine town of just over four thousand people, is located between Augusta and Waterville along the west side of the Kennebec River. Sidney was settled in the 1760's as part of Vassalboro and was incorporated as a town on January 30, 1792. The town was named for Sir Philip Sidney (1554-1586) who was English poet, courtier and soldier, and is remembered as one of the most prominent figures of the Elizabethan Age.

Once an agricultural community known especially for its production of hay and apples, Sidney is still home to working farms and retains its rural character. Sidney's original nineteen schoolhouses have been replaced by the highly respected James H. Bean Elementary School that is part of the Messalonskee School District. Bordered on the west by Messalonskee Lake, Sidney is a welcoming community that offers recreational opportunities, successful businesses, an excellent education for its children, and friendly neighbors!

The Town of Sidney is updating it's Comprehensive Planning. This document will help guide the Town of Sidney for the next 12 years. Postcards are available at the town office. Please take one and mail it back to us, or fill it out at the counter and put it in the suggestion box. You can also submit your information online on our Comprehensive Planning Committee Page. We want as many residents of Sidney involved as possible!

CHPC meetings are temporaily suspended until it is deemed safe to meet again. We'll post an update when we have the next date. Stay safe and healthy!

There are many residents that have come upon hard times and are in need of heating aid. These people are employed and they generally are not eligible for General Assistance.  By the generosity of those in better circumstances these families can be helped by the Town of Sidney Heat Fund. In order to keep this fund available we are asking for your help in donating what you can.   Please make the check out to Town of Sidney and mail to 2986 Middle Road, Sidney, ME 04330 or stop by the Town Office and drop off what you can. We thank you in advance for your generosity.

In response to COVID-19, the proper way to obtain burn permits is to access the online portals listed below:

** Permits will not be issued if it is a high class burn day or if the hours are out range for proper departmental staffing.

** Permits will NOT be issued at the Fire Stations or at any of the Officers' residences.

Do you have business to do at the Town Office, but you can’t make it in during our regular hours??

Other Offices and Hours